An analog pre-amplifer and bandpass filter board is fabricated for signal amplification and noise attenuation. The analog signal is digitally sampled at a rate of 200 kS/s by a NI (National Instruments) NI9223 Analog Input Module (DAQ). Array signal processing algorithms are programmed with LabVIEW on NI sbRIO-9606. The sbRIO-9606 then transmits the Direction of Arrival (DOA) computed with the MUSIC algorithm to the main computer through the UDP protocol.

The incoming ping is first extracted using Short-Time Fourier Transform (STFT) with a newly introduced dynamic thresholding method that vastly improves the susceptibility of the acoustics system to noise and interfering pings that are not of interest. The spectrum of the line of sight signal is then obtained, ignoring other parts of the signal that may be affected by multipath reverberation effects.

With that, the spatial covariance matrix is derived and the eigenvectors corresponding to the signal and noise subspaces are obtained from its eigen-decomposition. The MUSIC algorithm searches for a pair of azimuth and elevation angles where the array steering vector is the most orthogonal to the noise eigenvectors. Hence, the direction of the pinger is indicated by the maximum point of the MUSIC spectrum derived from the 2D search of azimuth and elevation angles, which is done on the Field Programmable Gate Array (FPGA) of the sbRIO-9606. 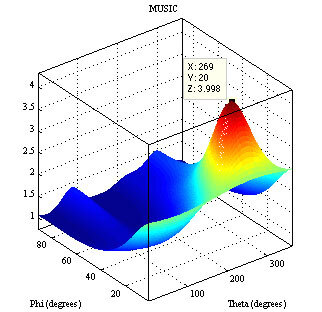